Your important role of a workcamp participant

During the third week of May, more than 200mm rain fell in Serbia in a week’s time. This is an amount that normally falls over 3 months. The heavy rainfall had three direct effects:

This flood disaster affected 1.6 million people in Serbia and resulted in 51 casualties. 32.000 people needed to be evacuated from their homes and the total economic effects of the disaster is calculated to be €1.7 billion (government of Serbia, et al., 2014).


The common, and traditional view of disasters, as shown below, is often explained in a model with a horizontal line: a disaster hits and the line goes down, the first response phase comes, the recovery phase follows which will push the line back up where it was before the disaster. 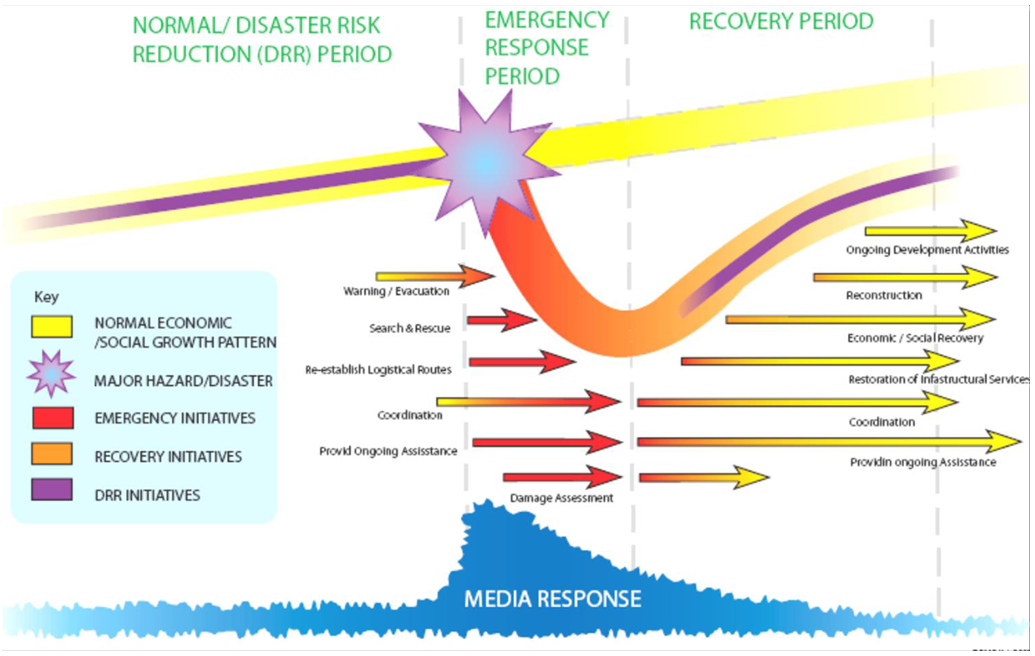 However, this model is not always the way it is in reality, especially for low income countries. The model shows that a disaster is a temporary interruption of the development of a country and after the recovery phase, it suggests that the line should go back to where it came from. But a disaster is much more than this picture illustrates.

The vulnerability to natural hazards can be defined into three different layers: first one is called the root causes(I), these result in dynamic pressures(II) which are than translated into unsafe conditions(III).

The Pressure and Release Model helps to understand why people live in houses that are not build strong enough to resist these floods, why people are located in areas where they should not be living, or why certain social groups are not able to recover. These vulnerabilities can be tracked down to the root causes and should be tackled there to make a change.

In Serbia the extraordinary rainfall let to the flood and affected many people. But especially the most social disadvantaged groups in society who already had a minimum income before the floods are the ones who are hit the hardest. They often have not the financial resources to cope with their losses, in addition, many job opportunities have been lost because of the disaster. An example of this was given in an interview in the report about the disaster in Serbia:

An interview with a farmer in Krupanj  demonstrates a typical challenge that small-scale farmers are faced with. The interviewee used to make 2,000- 3,000 EUR annually. However, as the floods contaminated the land, damaged equipment and killed livestock, there will not be any farming benefits this and next year. Due to the disaster, the farmer has retired and provides six members of family with pension which supplies EUR 121 monthly. An alternative source of income is not sought for. The interview mentioned that there are not many people in Krupanj who can afford to lend money.

Because of the changing climate we are facing, hazards such as the extreme rainfall in Serbia, will be more likely to happen. To make the community less vulnerable to disasters, and make a success out of the recovery in Serbia, effective programmes should be created at the root cause of the vulnerabilities. An effective method is the participatory approach. This means that you bring the community together and try to let everybody participate to create a better future.

This is where the flood relief workcamps this summer will show their strength. Being a volunteer you will be closely working together with flood affected people. It will be your job to help the people with some reconstruction and cleaning work, but most important, to provide them with positive energy and try to empower them.

An important group to focus on are children and young people. To tackle the root causes of the vulnerability to disasters, as explained above by the Pressure and Release Model, intergrading affected and non-affected as well as different social groups together will support the long term recovery of Serbia and strengthens the power of the people to cope with, and resist better against disasters.

So, you as work camp participant, should be aware of the unique and powerful role you can play during these work camps, and contribute to the positive recovery of Serbia.


Written by Joris Baars,  student of Disaster Recovery Management from the Netherlands and intern in Young researchers of Serbia during the flood relief workcamps